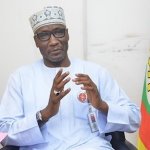 Kyari also lamented that the country’s laws were yet to align with current realities in the international oil market, stressing that the expected passage of the Petroleum Industry Bill (PIB) will generally transform the industry.

Speaking during the Third Annual Value Chain Magazine’s Lecture and Awards in Abuja, the NNPC boss maintained that the oil and gas industry was desperately in need of reforms, which the corporation is embarking upon, to make it more beneficial to its shareholders, the Nigerian people.

At the event with the theme: “The Role of the Media in the Nigerian Petroleum Industry Reform and Investment,’’ Kyari reiterated that the national oil company was no longer scared of being scrutinised by the public, explaining that there’s currently a new environment for transparency and accountability in the NNPC.

To that end, the NNPC GMD said the 2019 audited report of the corporation will soon be released to the public as a follow-up to the 2018 statement recently released, the first in 43 years.

According to him, the media should henceforth go beyond informing and educating the audience to asking probing questions in the way the industry is governed.

He said: “This is done when the media asks probing questions in the way people are governed and ultimately by joining forces with critical stakeholders and decision-makers in the society toward making life better for the common man.

“I have said it times without number that the NNPC is never afraid of any scrutiny. We will continue to play our strategic role as a key enabler of Nigeria’s economy.

“Our commitment toward entrenching Transparency, Accountability and best-in-class Performance Excellence (TAPE) in all our operations is still unshakeable. Since coming on board, we have been very open in our dealings with all our partners and stakeholders.

“From the unprecedented publication of our Audited Financial Statement and monthly financial and operational reports, to crude term contracts and several other bids and contracting processes. We are not relenting until this great corporation attains global excellence.”

Kyari posited that anything that happens in the oil and gas industry has a very direct impact on the country and implications for the economy, adding that it is the reason conversation around oil and gas is critical.

“We will continue to play our role as key enablers of the Nigerian economy and our commitment to promoting transparency and accountability will remain unshakeable.

“The petroleum industry, which has been with us for a long time, has been transformed with several modalities globally, but we as a nation has not fully adjusted to the realities in the industry,” he said.

He said the laws in Nigeria have not responded to the changes that have happened in the industry over time, adding that getting the PIB that is before the National Assembly passed will be a major step for the nation.

This, he explained, would make the sector more competitive and attract more investors.

“The process of this bill has been ongoing since 1999, and I am very sure it will be brought to a close soon. Through positive deliberations by stakeholders, the law will be passed,” he assured.

Kyari noted that the corporation will continue to partner with the media to ensure Nigerians are properly informed on the new proposed law, saying that every Nigerian deserves to know what the legislation means for the country and for the industry.

“It is therefore duty-bound on the media to continue to scrutinise the provisions of the bill to provide validation and even additional value,” the GMD said, stressing: “I am optimistic that through positive engagement and collaboration between the executive, the legislature and other stakeholders, the PIB will smoothly scale through the remaining legislative hurdles.”

He said with such legislation in place, the future of Nigeria’s oil and gas industry is certain and assured.