Why Oshiomhole hates me – Obaseki 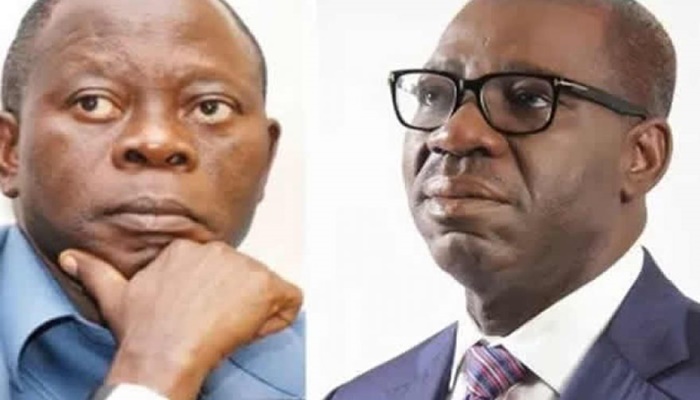 Edo Governor, Godwin Obaseki, has explained why Adams Oshiomhole, former National Chairman of the All Progressives Congress (APC), hates him so much.

A statement by his spokesman, Crusoe Osagie, said Oshiomole was frustrated and desperate to save his political career.

The reaction followed Oshiomhole’s comment that he made a mistake in 2016 when he supported Obaseki to become governor.

Obaseki declared that Oshiomhole was making all manner of claims because he could not hijack the current administration.

The governor accused Oshiomhole of awarding a contract at the Edo Specialist Hospital to an associate who failed to execute the project.

Osagie noted that the Governor’s predecessor was “clutching at straws in desperate effort to save his drowning political career. The childish Mercedes and Toyota analogy goes to show that Oshiomhole has run out of lies to tell.”

The aide said Oshiomhole keeps trying to turn the story of the hospital on its head.

“He has failed to answer a simple question which is; why did heavily guarded trucks come in the dead of the night to remove the equipment in the hospital which President Buhari had commissioned just one day after the commissioning?

“Why was the hospital not opened to the public for the remaining days of his tenure after the hospital had been commissioned?” He quipped.

Osagie insisted that Oshiomhole’s problem stemmed from his Obaseki’s refusal to allow him use the government “for the satisfaction of his warlords and thugs who are now fighting for him and causing crisis in Edo state ahead of the election.”

Obaseki of the Peoples Democratic Party (PDP) will slug it out with Osagie Ize-Iyamu of the All Progressives Congress (APC) on September 19.

Interestingly, the duo were candidates of the opposing parties in the 2016 governorship election.

Obasaki contested under the APC, while Ize-Iyamu was the PDP flagbearer.