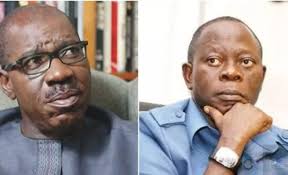 According to him, PDP, which the governor defected to after his disqualification to emerge its candidate in the September governorship election, supplied the evidence on which the APC screening committee based its decision on.

But PDP dismissed his allegation, saying Oshiomhole is clutching at straws to escape the imminent defeat of his party.

The APC screening committee had on June 12 disqualified Obaseki and two others from vying for its governorship ticket. The governor was declared ineligible for the party’s primary on the grounds that the committee could not vouch for the authenticity of his Higher School Certificate, which he claimed to possess but could not produce.

However, Oshiomhole, while addressing his supporters in Benin City yesterday, said the

APC only relied on the documents supplied by the PDP when the main opposition party took the governor to court in 2016 to challenge his candidacy.

He added that the PDP’s suit was struck out because the party filed it out of time.

According to him, APC learnt a bitter lesson from the mistake in Bayelsa State, where the Supreme Court, on the eve of his inauguration, disqualified its governorship candidate that had won the election because of issues over his running mate’s credentials.

The experience, he added, made the APC to decide to stick to the rules.

He said: “PDP took Obaseki to court that he forged certificate. Now, you remember one governor that said they are tax collectors- when someone moved. So, they collected the taxes and the certificates became okay. But let me tell you, they know that the man who has forged documents even if you vote for him, you know what happened to us in Bayelsa. So, I need to assure you that the decision of the screening committee to disqualify the sitting governor was based on the evidence provided by PDP, which they found to be correct and you do not repeat the same mistake twice.

“The only task we have is to go to every ward, every unit, every local government and every community and remind them of where we stopped and ask them since we left what new thing has been brought in?

“If I fail GO (Godwin Obaseki) examination, by the grace of God on POI (Pastor Osagie Ize-Iyamu), I will score A1. It is not unusual to misread people but it will be unusual after misreading them, you continue on that dangerous path. We have a duty to correct it. I assure you there are no personal issues whatsoever.”

On his removal as chairman of the party, he said: “I hear some people say ‘Oshiomhole has lost his seat as the national chairman,’ and I asked, ‘is it my father’s job?”

He described him as a man desperate to do anything to save APC from an imminent defeat.

“Adams Oshiomhole is clutching at straws, having been abandoned in the sun by his party, the APC.

“He must be alive to accept the fact that the people of Edo State are interested in returning a governor that has performed creditably well and denied the godfathers access to the treasury of the state.

“The PDP is not interested in any unsubstantiated allegations being bandied by Oshiomhole and as such, our party is moving from ward to ward talking to people of Edo State to return Obaseki and his deputy, Philip Shaibu, for their performance in office,” he added.