Buhari chides service chiefs over insecurity in the country 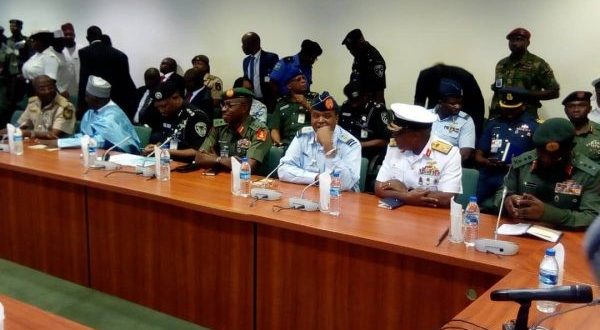 He said even if the heads of the nation’s security agencies could be said to be doing their best, their best was not good enough to stem the security challenges currently facing the country.

The National Security Adviser, Major General Babagana Monguno (retd.), disclosed this to State House correspondents at the end of a meeting Buhari had with the security chiefs at the Presidential Villa.

Monguno quoted Buhari as telling the security chiefs that he was “extremely unhappy” about the nation’s current security situation under their watch.

He said the President had warned that he would no longer tolerate further escalation of the already bad security situation.

The NSA said, “A meeting was just concluded between Mr President and heads of the security agencies; that is the operational heads consisting of the Minister of Defence, the service chiefs and on the other hand, the intelligence component that consists of myself and the intelligence heads

“Today’s meeting basically focused on recent developments. Mr President has expressed great concern over the declining security situation in the country. He is extremely unhappy about what is happening and he feels that, even though the security agencies are doing their best, their best is not good enough for him and wants an immediate reversal of the current trend and immediate reversal of our misfortunes in all their dimensions.

“Mr President also told us clearly that he and indeed the administration campaigned to power on the platform of three issues: fighting insecurity, overcoming our economic difficulties and dealing with the scourge of corruption.

“More so, he noted that it takes common sense for anyone to understand that without security, the pursuit of the other two campaign promises will just be an exercise in futility.

“He, therefore, warned the security agencies to take into consideration the wider implications of the gradual decent of the security of this country; he is not going to accept any further escalation of the security situation.”

Monguno said Buhari made it clear that none of the security chiefs was forced on him as he selected them based on what he felt their records revealed.

He further stated that the President told them that it was left for them to live up to expectations and justify the leadership by not disappointing the populace.

He said Buhari pointed out immediate areas of concern to include the issue of proliferation of drugs, small arms and light weapons, noting that they contribute to banditry and terrorism.

The NSA added that the use of unregistered SIM cards also came up and the President directed him to meet the Minister of Communications and Digital Economy, Isa Pantami, to work out a blueprint on the matter.

“In the final analysis, Mr President has said everyone is doing his best but his best is not good enough. That should send a signal to all of us. But again, it is also incumbent on the wider Nigerian population to key into whatever the security agencies are doing,” he added.