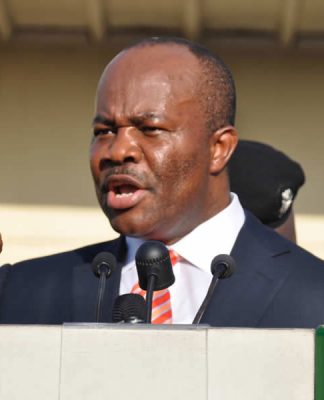 Minister of Niger Delta Affairs, Senator Godswill Akpabio, has expressed the readiness of his ministry to form a strategic alliance with the Central Bank of Nigeria (CBN) for improved agriculture development in the Niger Delta region towards the provision of employment opportunities to the teeming youths of the region.
The minister, who disclosed this during a meeting with officials of the bank, when he paid a courtesy visit to the CBN Governor, Mr. Godwin Emefiele, in his office in Abuja, said the joint venture would not only help to explore the agricultural potential of the region, but would also serve as value-addition to region’s food production.
Akpabio, in a statement by Patricia Deworitshe, explained that the ministry has a pilot programme on rice production in the nine states of the region, noting that this would help to provide employment opportunities for the people, check hostilities and improve the living standard of the people in the region.
The minister lauded the coperation between the CBN, the Niger Delta Development Commission (NDDC) and his ministry, adding that this has come to stay even as he commended Emefiele for what he has been doing so far with the Anchors Borrowers Programme (ABP).
In his remarks, the Minister of State in the ministry, Senator Omotayo Alasoadura, commended the willingness and knowledge base of the CBN officials on every aspect of the projects, expressing the readiness of the ministry to work with the CBN so that they would be on the same page in doing the needful in order to drive the process.
Reaffirming Akpabio’s position, Alasoadura noted that President Muhammadu Buhari’s vision is the urgent need to develop the Niger Delta region, adding that it was the motivation that’s driving the process.
“With the support of the CBN, we are going to work to ensure that efforts of both sides come to fruition,” he said.
In his remarks, the Special Assistant to the CBN Governor, Mr. Anthony Ikechukwu, reiterated the bank’s position to supporting viable projects in different aspects of agriculture development, assuring that the bank was going to work across the region with the various teams that have been put on ground.

Lagos Refutes Report of Outbreak of Coronavirus
Lagos State Government has denied reports on social media that there were large numbers of Chinese nationals infected with Coronavirus in Gowon Estate, saying preliminary investigation showed otherwise.
The social media report had said the Chinese nationals in Osoba Close, Gowon Estate recently came back from Wuhan and were treating themselves from symptoms of the virus in the estate.
But, Lagos State Commissioner for Health, Prof. Akin Abayomi, yesterday said there was no Osoba close or street in Gowon Estate as speculated in the viral social media broadcast, adding that it has used all available intelligence from key community members to investigate the claim.
He said: “A team was deployed to the estate along with key community members, including ward focals, councillors, motor bike riders, market women, bar tenders, using implementation and Google maps to thoroughly search all streets in the estate.
“We will continue our investigation with full cooperation from the DPO of Gowon Estate Police Station through the intervention of the Office of the Chairman of Mosan Okunola Local Council Development Area, who has promised to reinforce our surveillance team.”
He called on Lagos residents to desist from circulating any suspected case of Coronavirus outbreak directly to the public, adding that such cases should be reported to the ministry through dedicated phone numbers; 08023169485 and 08033685529.
“Circulating suspected disease outbreaks to the public can cause panic and anxiety among the citizens which may result in greater harm. We also call on Lagos residents not to engage in false news of disease outbreaks as this is considered a serious offence with biosecurity implications. Any person found to be engaging in this kind of misinformation will be prosecuted in accordance with the law,” Abayomi added.