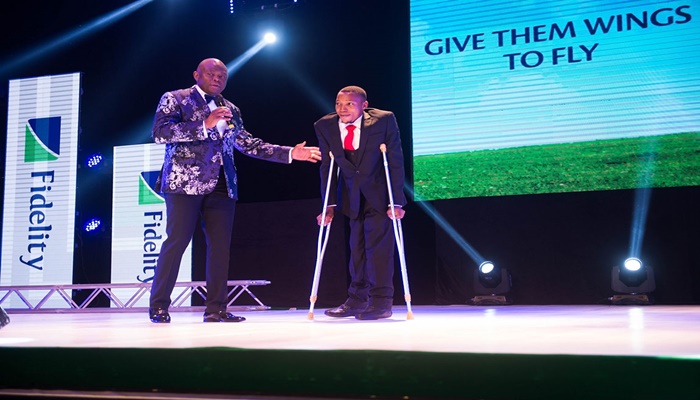 Fidelity Bank Plc has brought succor to physically challenged Chemical Engineering graduate, Mr. Micheal Sowunmi who is fondly referred to as “the world’s greatest teacher” on account of his love for teaching.

Sowunmi has been offered employment by top lender Fidelity Bank as a facilitator at the bank’s training academy known as CREST Academy.

This much was revealed by the bank’s CEO Mr. Nnamdi Okonkwo during the bank’s 2019-year end /customer appreciation party which took place at the weekend in Lagos. Okonkwo said the move was consistent with the Corporate Social Responsibility (CSR) policy aimed specifically at uplifting the less privileged members of society.

According to him, the theme of the party ‘Give them wings’ was crafted to underscore the bank’s CSR initiatives and interventions. “Sowunmi’s case is not an isolated one we have indeed demonstrated our passion for lifting people several ways as you have seen tonight with the case of Tim Godfrey and DJ Slim V and the Fidelity Youth Empowerment Academy”, he explained.

Chairman of the Board of Directors, Ernest Ebi, also gave lucid insights into the philosophy behind the bank’s Youth Empowerment Academy (YEA), which he described as a veritable platform to make beneficiaries financially independent and self-reliant. “Fidelity Bank is making the youths turn their passion into a pay cheque through empowerment programmes which includes vocational training in fashion, make-up, coding, catering and more” he said.

Ebi said that the programme seeks to empower Nigerian undergraduates with vocational skills and enterprise training which are relevant for self-reliance. Over 2000 students have benefited from YEA programs at University of Nigeria, Nsukka; Waziri Umar Federal Polytechnic, Birnin-Kebbi; Federal Polytechnic Oko; Rivers State University of Science and Technology, Port Harcourt, and Bayero University, Kano. Some beneficiaries who have since started their own businesses were recognized at the event.

On Tim Godfrey, Okonkwo said the bank is fully supportive of him in spite of the fact that he does not play secular music, just as it has thrown its weight behind DJ Slim V who was discovered from a chance encounter at somewhere in the eastern part of the country. “Today, we have given them a platform this big to perform and showcase their craft to the admiration of all. We urge you to patronize them so they can grow. These energies they are displaying could have been channeled to negative vices” he stated.

The annual event which lasted to the wee hours of Friday last week had in attendance key stakeholders, customers and prospects including public office holders, traditional rulers, regulators and policy makers. KCee of 5 Star Music, Niniola, Timaya and Flavour performed at the party whilst comedians, Bovi and Larry J thrilled with rib cracking jokes. Some of the dignitaries at the event were Africa’s richest man, Aliko Dangote, Deputy Governor of Lagos State, Obafemi Hamzat, Minister for Transportation, Rotimi Amaechi and Alhaji Nasiru Yusuf-Gawuna, Deputy Governor of Kano State, Mr. Ernest Ndukwe, Chairman MTN Nigeria among others.