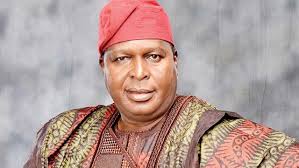 For violating its order, a High Court of the Federal Capital Territory, Maitama, Abuja, on Thursday, 10th January 2020, jailed the Director-General, National Council for Arts and Culture, Olusegun Runsewe.
Justice Jude Okeke in a ruling ordered the Inspector-General of Police to arrest him and hand him over to the Nigerian Correctional Service in Kuje, Abuja.
The judge ordered him to remain in prison “until he purges himself contempt”.
Runsewe was committed to prison on Thursday following his disobedience of an order made by the court on December 15, 2017.
The order was in respect of a suit filed by Ummakalif Ltd for the sealing of the Arts and Crafts village in Abuja.
The suit was instituted against the Director-General of NCAC, the FCT Minister, the Federal Capital Development Authority, and the Minister for Culture and Tourism.
The plaintiff had alleged in his suit that the sealing of the village was a violation of the contractual agreement for him to develop a part of the village.
He filed a June 21, 2019 motion seeking Runsewe’s imprisonment for allegedly violating an order of the court made on December 15, 2017 directing parties to maintain status quo.
The order, according to the plaintiff, implied that no step should be taken to shut the village.
The plaintiff’s motion filed in line with Order 47 Rule 10 (1), (2)and (3) of the High Court of the FCT Civil Procedure Rules 2018, prayed that Runsewe be committed to prison for disobeying the court order.
Granting the application on Thursday, Justice Okeke held that committing Runsewe to prison for contempt would serve as a deterrent to others in the habit of abusing their office and disobeying court orders.
Justice Salisu Umar who was handling the case before his elevation to the Court of Appeal, had on March 6, 2018, descended on the NCAC for sealing up the village in violation of the earlier order of the court.
The matter was reassigned to Justice Okeke following Justice Umar’s elevation.