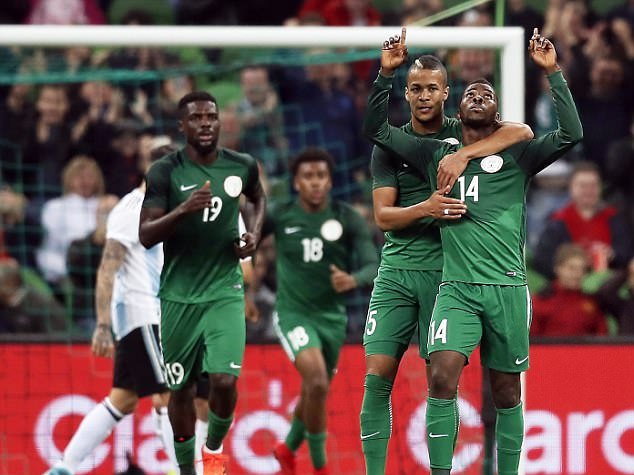 Nigeria’s leading brewing company, Nigerian Breweries Plc has urged the Super Eagles to extract their pound of flesh from the Bafana Bafana of South Africa when the two sides meet on Saturday in a 2019 Africa Cup of Nations match day five game at the FNB stadium in Johannesburg, South Africa.

This motivational message was contained in a Press release issued by Emmanuel Oriakhi, the Marketing Director of Nigerian Breweries Plc on the AFCON qualifying game coming up this weekend in South Africa.

It would be recalled that South Africa defeated Nigeria 2-0 at the Godswill Akpabio stadium in Uyo, Akwa Ibom state in the opening group E game of the qualifiers in June 2017, but Emmanuel Oriakhi,the Marketing Director of Nigerian Breweries Plc believes coach Gernot Rohr and his Eagles are motivated to avenge that loss and confirm their ticket to the biennial African football fiesta in Cameroun next year.

“As an official partner of the Nigeria Football Federation, Nigerian Breweries Plc is solidly behind the Super Eagles to deliver the goals and the points to seal the very important ticket that will guarantee Nigeria’s return to the Africa Cup of Nations after failing to qualify for the last two editions in 2015 in Equatorial Guinea and 2017 in Gabon,” Oriakhi stated.

The Super Eagles are expected to start arriving the team’s camp in Asaba, Delta state from Monday, November 12 to begin preparations for the game scheduled for the 94,000-capacity FNB stadium in Johannesburg and Nigerian Breweries Plc, whose brands,Star Lager beer and Amstel Malta are the Official Beer and Official Malt drinks of the Super Eagles respectively has assured NFF and the team of its support all the way to South Africa.

“As the Official Beer and Official Malt drink of the Super Eagles, the two brands will be providing support to players and coaching crews, as well as premium satisfaction to millions of passionate fans that will be cheering the Super Eagles before,during and after Saturday’s game in Johannesburg to secure the ticket to participate in the 32nd edition of Africa’s premier football competition, Cameroun 2019, Oriakhi added further.

Meanwhile, Confederation of African Football (CAF) have named Gambia’s Bakary Gassama as the centre referee for the game with his countrymen,Sulayman Sosseh and Omar Darboe as the first and second assistant referees respectively.