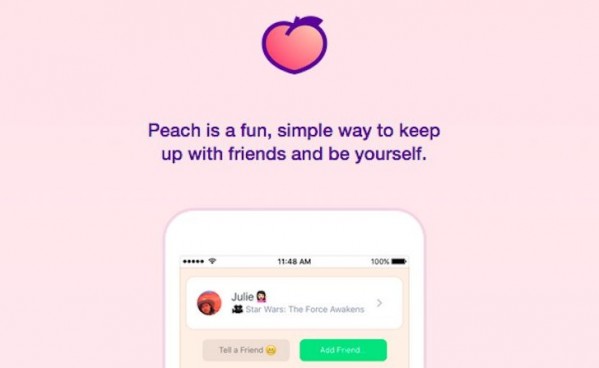 Peach, a brand-new messaging app from the creator of Vine that’s supposed to do things no messaging app has ever done before.Instead of complicated menus, you perform actions with the help of magic words. To post a status message use the magic word “shout” to write a few words and emojis in a larger font on a background colour.
You can create and share doodles with the magic word “draw”. Use the magic word “gif” for searching and posting GIFs. Same goes for pictures, looping photos, videos, and links

Posting where you are and what you are doing is more intuitive as well with magic words like here, weather, move, meetings, time and date. Sharing information about your current entertainment has been revamped on Peach. You share the name of movie or TV series or song and give a rating from one to five. This helps other Peach users see the ratings from a particular individual instead of viewing overall ratings like you do on Facebook. Peach encourages you to share even if you have nothing to share, just tap on the light bulb icon and Peach asks you questions and suggests new ideas.

It effectively lets you find your friends and upload gifs, pictures, and status updates in your own feed, and then view your friends’ updates too.
– Magic Words give you fun things to post to your space. Start typing a Magic Word, then tap the bubble that appears to activate it.
– Use “draw” to post a doodle or sketch.
– Use “song” to share whatever’s playing right now. Friends can tap on the song to open it in Apple Music or Spotify.
– The magic word “rate” lets you give anything—anything!— a 1-5 star rating.
– Other magic words: gif, here, goodmorning, goodnight, battery, weather, move, meetings, safari, dice, time, date, movie, tv, and game. With more on the way.
– Use the magic word “shout” to write a few words (+ emoji) in BIG letters on a background color.

Typing “shout” lets you write in big blown up letters on a colored background with an emoji. “Draw” does what you think it would, “song” lets you share what you’re listening to with others, who can tap on it to listen themselves, and “rate” will let you rate literally anything between one and five stars.

GIF, here, goodmorning, goodnight, battery, dice, safari are also Magic Words, and Peach promises more are on the way. If you’re out of ideas on what to post – common problem, we know – you can hit the lightbulb for some inspiration.

And, in a nod to Facebook, you can also give friends a little virtual nudge by sending them an emoticon like a slice of cake, a 100, or a boop – literally a nose and finger. How else would you say, “I’m thinking of you”?

The app also has an accompanying website, Peach.cool, which doesn’t do anything except tell you about the app and direct you to the App Store, but it may be up in preparation for a web version to come.

For instance, if you type “gif,” a Giphy search tool appears. Typing “here” adds your current location. There’s a complete rundown of the app’s “magic words”here.

The free, iOS only app describes itself as a “fun, simple way to keep up with friends and be yourself,” which is pretty vague, but Peach itself is strangely addicting. The internet went crazy for it on Friday.