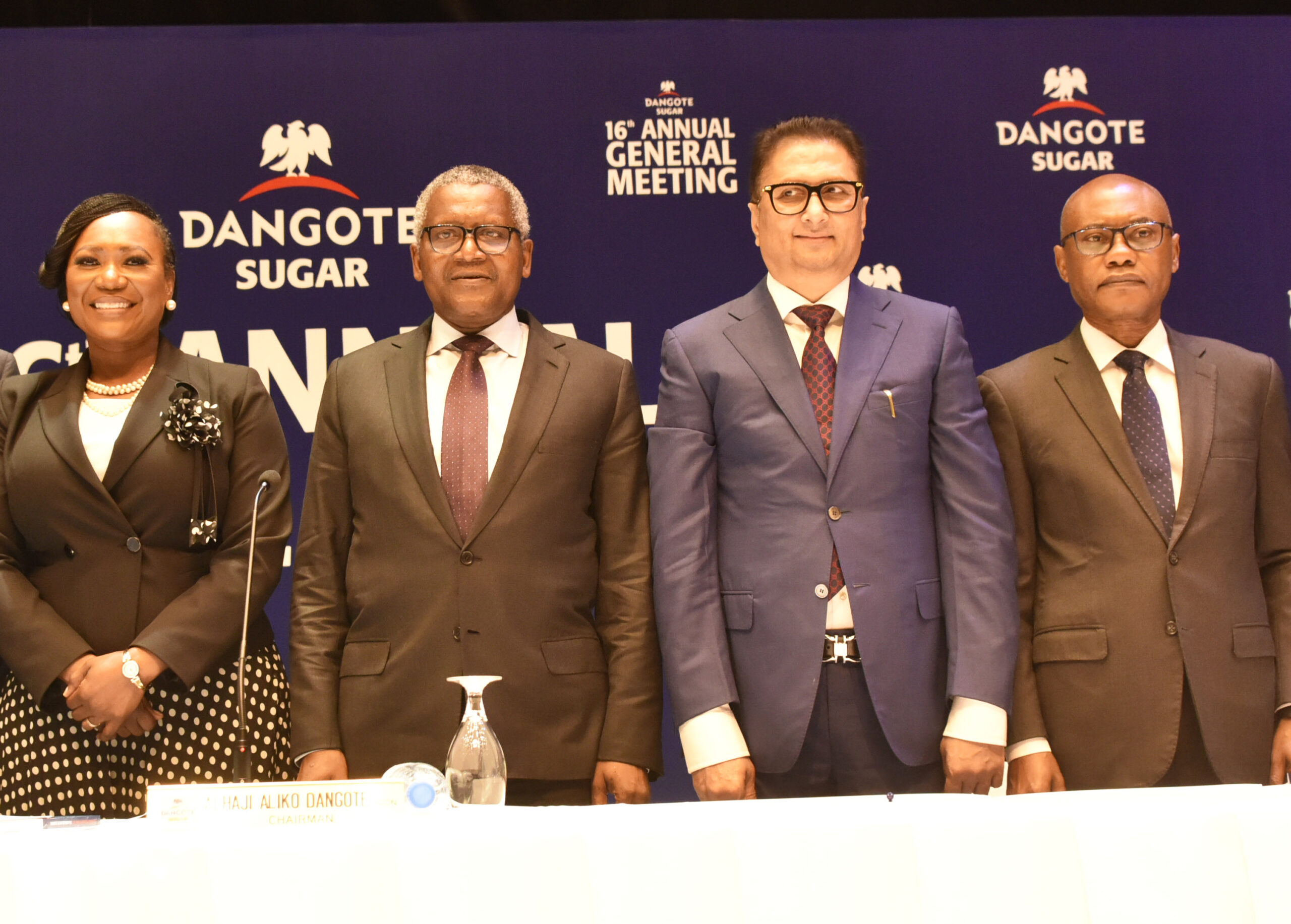 Dangote Sugar Refinery Plc has restated its commitment to the achievement of Sugar Backward integration projects, describing it as the best thing that happened to the sector.

Speaking to shareholders at the 16th Annual General Meeting (AGM) of Dangote Sugar Plc, in Lagos the Chairman of the Company, Aliko Dangote, said that despite the harsh operating environment, the board and management were not deterred in the pursuit of sustainable growth for the company and demonstrated resilience by continued implementation of its strategic objectives during the year, 2021.

The dividend pay-out of N12.147 billion for the year was unanimously approved by the shareholders. The dividend represents N1.00 per share.

The Company under review posted a Group turnover of N276 billion, being 29 percent increase over N214 billion in the comparative year. Profit before tax of N34.021 billion, profit after tax of N22.052 billion. Group EBITDA decreased to N46.5 billion with an EBITDA margin of 18 percent.

According to Dangote, the Company’s performance during the year under review is commendable amidst the challenges and the negative impact of COVID-19 pandemic on economic activities. “We furthered the implementation of process optimisation, cost savings, and product promotion strategies with the launch of our new brand identity and the pursuit of the Dangote Sugar Backward integration master plan”

He further stated that the Board and Management will continue to implement strategic actions to sustain and surpass this performance while engaging with all stakeholders in the sector and its communities to ensure the realisation of the objectives of the Company.

On the company’s backward integration project, Dangote chairman emphasized that the goal of Dangote Sugar Backward Integration Projects Master plan remains the achievement of 1.5 million MT annually from locally grown sugar cane in support of the quest for sugar sufficiency in the country by the federal government.

He added that this will be achieved in addition to the extended value chain benefits that will be derived from the projects including thousands of jobs that will be generated in the sector from these projects.

He pointed out that despite the challenges faced in the year 2021, Dangote Sugar Numan Operations rehabilitation and expansion efforts of the factory and field are advancing, saying “The community tissues that came up were effectively managed, and we have continued to advance so far without any major disruptions.”

He also noted that “In 2021, our commitment to building a sustainable business remained on track with the principles of good corporate governance. We imbibed best practices, environmental and impact management in the day-today running of our business.”

He assured of the company’s commitment to the achievement of Sugar Backward integration projects, which is the future of the industry in Nigeria, saying this will keep us on our sustained growth path and we will continue to deliver and improve our quality service while delivering value to all stakeholders.

Also, the Group Managing Director/Chief Executive officer of Dangote Sugar, Mr. Ravindra Singhvi said that “We remained ahead of the pack in implementation of the National Sugar backward Integration Development Master Plan.”

He however said that the situation at the Lau/Tau project is still the same, “we continue to remain hopeful that the Taraba State government will resolve the lingering issues with the communities, while we focus on the development of other brown and green field project sites…Steady progress is now being made as we continue the rehabilitation and expansion project at Dangote Sugar, Numan, and development activities at the Nasarawa Sugar Company Limited, Tunga.”

Singhvi stated that the Company remains resolute and committed to ensuring a sustainable future for its business while assuring the shareholders of better days ahead.

Another shareholder, Mr Patrick Ajudua, also expressed satisfaction with dividends declared particularly at a time like this with the various environmental operating challenges.

He charged the management to improve upon the capacity utilisation of the plant to be better positioned to meet local and export needs.