Against Q2 GDP odds, Nigeria stock market up by N33bn 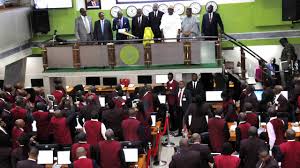 Activity on the Nigerian Stock Exchange (NSE), on Tuesday, August 25 2020, defied the negative Gross Domestic Product (GDP) recorded in the second quarter of 2020 to rev upward to positive zones.

Omordion stated that the half year corporate earnings performance were above the market expectations, with emerging sectors outperforming the traditional sectors in the new normal.

The upturn was impacted by gains recorded in medium and large capitalised stocks, amongst which are; BUA Cement, Julius Berger, Flour Mills, Lafarge Africa and NEM Insurance.

Analysts at Afrinvest Limited said “Given the gaining streak, we expect investors to take profit in subsequent trading days.”

NEM Insurance dominated the gainers’ chart in percentage terms, gaining 9.63 per cent to close at N2.05 per share.

Conversely, Beta Glass led the losers’ chart in percentage terms, losing 9.99 per cent to close at N55.40 per share.

This was against a turnover 251.19 million shares valued at N2.36 billion transacted in 3,737 deals on Monday.

Transactions in the shares of Transcorp topped the activity chart with an exchange of 94.88 million shares worth N52.28 million.