Sanwo-Olu Sympathises as Fasanmi dies at 94 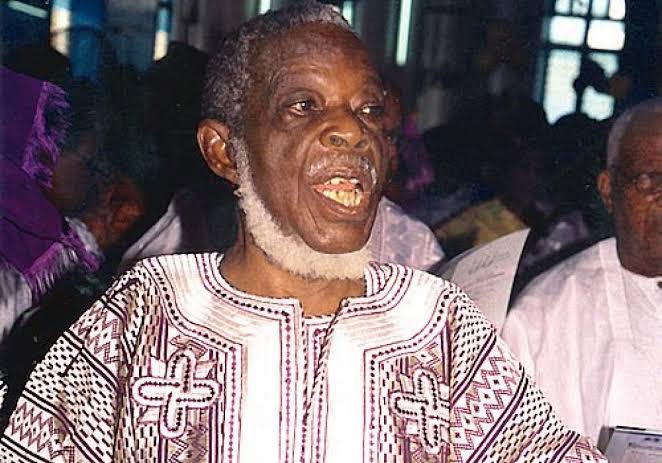 Governor Lagos State Governor, Mr. Babajide Sanwo-Olu has expressed sadness over the death of an elder statesman and leader of Yoruba socio-cultural group Afenifere, Senator Ayo Fasanmi whom he described as “a great Nationalist, passionate leader and humility personified.” He was aged 94.

Pa Fasanmi, also the leader of Egbe Ilosiwaju Yoruba, died in the early hours of Thursday, after a brief illness.

Governor Sanwo-Olu, in a condolence message signed by his Chief Press Secretary, Mr. Gboyega Akosile, said the death of the nonagenarian came at a critical period when his wealth of experience, knowledge and wisdom was most needed in Nigeria.

Governor Sanwo-Olu who also described the late Pa Fasanmi as a complete gentleman and selfless leader said he contributed immensely to the development of South West region in particular and the nation in general.

According to Mr Governor, “Pa Fasanmi, was an exemplary leader who spent the greater part of his life in the service of humanity, particularly the Yoruba course where he contributed to the development of the region.

“He was National President of the Pharmaceutical Society of Nigeria in 1977, elected into the Senate in 1979, and became a member of the House of Representatives in 1983.

He also served as a member of the National Constitutional Conference Commission in 1994.

“Pa Fasanmi was indeed an icon who will never be forgotten in history of Nigeria and the Yoruba race. He will surely be missed.”

Governor Sanwo-Olu said that late Pa Fasanmi, who was an “Awoist” to the core, would be remembered for his words of wisdom in keeping Nigeria as one united entity.

The Governor added that Pa Fasanmi, had always been advocating to Yoruba leaders to forget their differences and close the ranks for the good of the Yoruba race and Nigeria as a whole.

According to the Governor, “the late Pa Fasanmi made the call in Lagos in his remark at the public presentation of the book: “Yoruba Elites and Ethnic Politics in Nigeria: Obafemi Awolowo and Corporate Agency”, written by Professor Wale Adebanwi, an Associate Professor in African American and African Studies, University of California-Davis.

“According to the frontline politician and second republic senator, this is (then) the time for political differences that have existed among the Awoists and the entire Afenifere clan to be cleared.

“At this auspicious time in our country, it is good we are having an occasion like this which brings many of us (Awolowo Associates) together. The event of today suggests to me that we need to forget our differences.

Sanwo-Olu stated that the above statement among other great virtues are what the late Fasanmi stood for.

“May God give the departed soul eternal rest and the family the fortitude to bear the loss. Adieu Pa Fasanmi,” Sanwo-Olu stated.

Edo Deputy Governor: No amount of kneeling stunt will save Oshiomhole, Ize-Iyamu from defeat on September 19

Edo State Deputy Governor and the running mate of Governor Godwin Obaseki in the September 19 election on the platform of Peoples Democratic Party (PDP), Comrade Philip Shaibu, has insisted that no amount of kneeling stunt will save the former National Chairman of the All Progressives Congress (APC), Adams Oshiomhole, and his party’s candidate, Osagie Ize-Iyamu, from defeat and humiliation on election day.

The Deputy Governor said this in the course of a road show across Edo State that spanned from Akpakpava Road in Benin City, through Ekpoma to Jattu, in Etsako West Local Government Area (LGA).

He insisted that no amount of kneeling stunt will save the former national chairman of the APC and his candidate from defeat and charged Edo electorate to vote for the PDP and defend their votes on election day.

Shaibu, however, noted that the governorship electioneering campaign would be issues-based, with focus on performance and not on persons nor the throwing of tantrums and making deceptive public appearances.

The Deputy Governor explained that the election presents Edo people the opportunity to make a decision about the future of their unborn children “and not a time to think about pecuniary gains and egos of wannabe godfathers”.

He explained that before the former national chairman of the APC masterminded their disqualification from contesting the governorship election under the APC, he personally scheduled several peace meetings with Oshiomhole but all were to no avail.