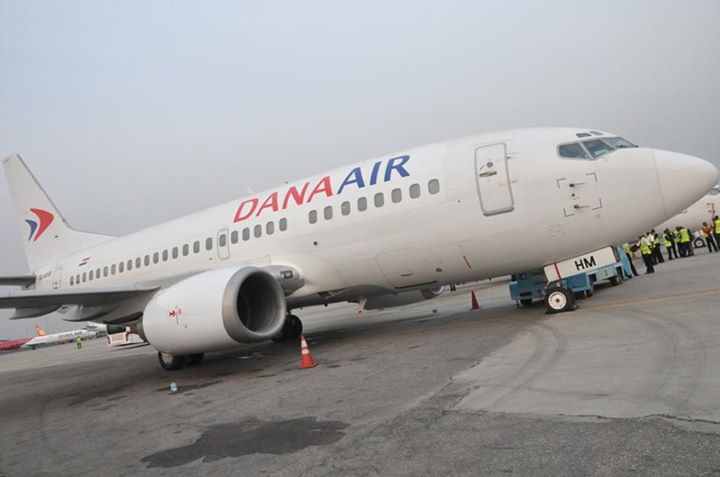 Dana Air flights were disrupted on Monday as a result of the ongoing renewal process for the airline’s certification by the Nigerian Civil Aviation Authority.

Some passengers of the airline heading to Abuja from Lagos on Monday, who were originally meant to fly to their destination on a Dana flight, could not do so, but were rather airlifted by a MaxAir aircraft.

Narrating what transpired at the airport in Lagos to our correspondent, one of the passengers who simply gave his name as Austin, said, “We were supposed to travel with flight 9J355 for 11:15am to Abuja from Lagos.

“They checked us in with Dana Air boarding passes, but we observed that on our boarding passes, officials of the airlines used a pen to write MaxAir. But despite this, the MaxAir flight did not fly at the scheduled time.”

The passenger added, “When the MaxAir aircraft that was supposed to take us to Abuja eventually came to the Lagos airport, we realised that it already had some of its own passengers. We were then told that only about 80 Dana passengers could be absorbed in the MaxAir flight to Abuja.

“This announcement angered many passengers but the airline was able to calm some of the travellers. This was how the officials then started to call the numbers of passengers from one to about 80 to join the MaxAir flight. Other passengers on the Dana flight who were not called had to wait at the Lagos airport.”

When contacted to know if the NCAA was aware of the development, a spokesperson of the authority, Jimoh Mohammed, said Dana was concluding the renewal process of its certification and so could not fly until the exercise was completed.

He said, “Dana Air is actually concluding the renewal process of their certification. And since the old certification has expired, they have to complete and conclude the renewal process before they start flying. They are free to transfer their passengers to other airlines, there is no problem with that, especially when you interline with other carriers.

“Since they cannot fly without certification, they are free to interline. The fact remains that they cannot fly if they don’t complete the certification process. However, they are currently concluding this process and are at the last stages. So any moment from now everything will be okay. That is the situation right now.”

The spokesperson for Dana Air, Ezenwa Okwudili, told our correspondent that it was the duty of the airline to ensure that its passengers get to their respective destinations.

He said the airline had to ensure safety, as well as uphold the advice of the NCAA as regards interlining with other domestic carriers whenever there was need to do so.

Okwudili said, “The NCAA has advised airlines to try and avoid having issues with passengers by ensuring that airlines do what we call code-share or interline among themselves locally. Once you cannot operate a flight, you can tell another airline to assist you.

“The most important thing is to get the passenger from point A to point B. The fact is that the passenger must get to his destination, which is the contract you have with them as an airline. It is our standard practice to send our aircraft for checks and that is what we do and have been doing. This is a safety measure.”