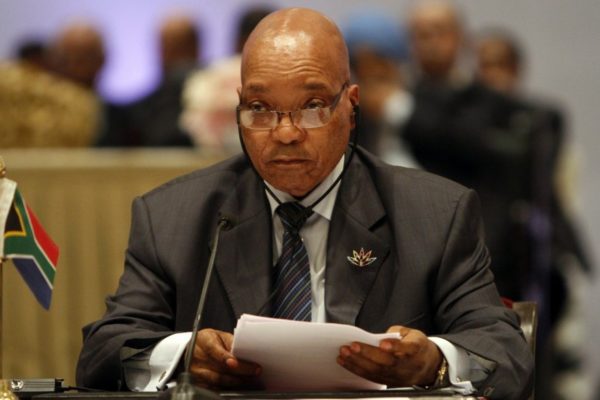 South Africa’s former President Jacob Zuma is hugging the headlines again with reports that he has fathered a new baby from a 24-year-old woman.

She gave birth to his child in a Durban hospital last week Thursday on his birthday, News24 reported yesterday.

The mother is identified as Nonkanyiso Conco and is set to become Zuma’s seventh wife.

“Yes‚ we are getting married‚ but that is all I can say. I need to consult before I give any interviews‚” she said.

Conco is a director of the Pietermaritzburg-based Nomkhubulwane Culture and Youth Development Organisation‚ aimed at protecting the cultural practices of young Zulu women.

Conco reportedly resides in the plush Ballito Estate Hilltop‚ home to some of the city’s most well-heeled residents.

According to News24, the woman delivered the child at the Busamed Hillcrest Private Hospital last Thursday – Zuma’s birthday.

Zuma is a polygamist who has fathered 22 known children from at least 11 women.

“They had to clear the maternity ward for other patients. Hospital staff made it clear that this was strictly confidential,” a source with direct knowledge of the birth told News24.

Ray Zuma, who is related to the former president, said Zuma was going to wed a woman named Nonkanyiso Chonco.

When asked if Conco was the same woman who had given birth to a baby earlier this month, Ray Zuma responded by saying: “So?”

“I can’t see why you are interested. When he was still the president, you [the media] were terrorising him, and now you are all of a sudden interested in him.”

When asked about the details of the wedding, he said he was not privy to the details.

“No date has been set yet. Both families must come together to decide on the date. We are still in the pre-nuptial phases of the process.”

Zuma’s son Edward told News24, when asked about the baby: “We are not going to respond, or entertain any of that nonsense”.

When News24 visited the hospital earlier in the week, an employee confirmed that Zuma had visited the facility.

“Yes he was here last week. I saw him with his security. I do not know why he came through.”