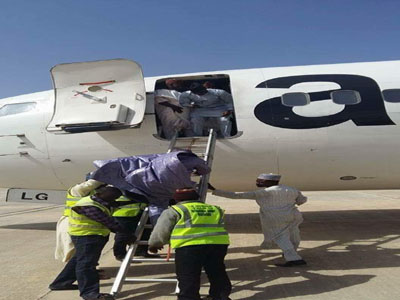 According to The Nation Ng. A mild drama unfolded yesterday at the Bauchi Airport when passengers used ladder to disembark from a chartered aircraft belonging to Nigeria’s oldest carrier: Aero Airlines.

It was learnt that the aircraft had problems with unserviceable equipment by the airport management in disembarking about 34 passengers from Abuja Airport.

The use of ladder to disembark passengers a source hinted is against standard aviation practices as prescribed by the International Civil Aviation Organisation (ICAO) on passenger facilitation.

According to the airline, at the time the 34 passengers were boarding the chartered flight at the Abuja Airport, the air stairs was functional.

The airline confirmed the incident in statement by SY & T, media consultant to the Aero Contractors. It explained “A special charter flight operated by Aero to Bauchi had problems with unserviceable equipment by the airport management in disembarking about 34 passengers from Abuja. Consequently against the airline’s wish and operation safety guideline, the passengers used a ladder to disembark.”

“Aero wishes to state that it took adequate and safety measures for this operation, including the airport’s ground staff crew to handle the air stairs equipment in Bauchi, unfortunately it became unserviceable at the point of disembarkation.